The National Move Into Termite Territory

Rebuilding after the fires, floods and cyclones of Queensland, NSW, Victoria and WA may raise next year’s projection from the Housing Industry Association. You can expect these rebuilds to be constructed observing the lessons learned from water, wind and fire.

But can we ask what lessons will influence the construction of the thousands of new homes destined for the ever extending fringe areas of the big cities? Will they be built observing and recognising the lessons which should have been learned from 130,000 termite attacks last year?

Yet these homes will be put on new subdivisions of what was once either semi-rural or even fully covered bushland.

It can seem insensitive to compare the $1b termite damage to 130,00 homes a year to the much costlier damage by fire/floods/cyclones to about 100,000 homes — but insensitive or not, termites damage this many homes at an average cost of $8000 each according to Archicentre the website of the Australian Institute of Architects.

Some of these owners will also experience sleepless nights and a desperate sinking feeling as they face refinancing their home (if there’s any equity left in it) to meet termite treatment and repair costs. 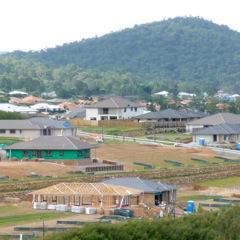 So what are the building authorities, developers, builders and homeowners doing about plonking another 108,000+ free standing houses down in termite territory?

Currently, new buildings must be constructed with physical and termite barriers under building codes based on various Australian Standards, “enforced” by Local Government.

If these standards are followed, the barriers will either prevent the passage of subterranean termites from the soil into the timberwork of the buildings or at least, force the termites to build their mud-like access tunnels out in the open where they can be seen during an annual or twice yearly inspection. Using termite resistant timbers (or even no timbers) will just about eliminate the probability of termite inflicted pain.

So would building houses up off the ground; suspending floors so inspections could reveal attack before it became significant. That won’t happen unless home owners insist, because builders, since the 1960s, worked out they could build houses faster and cheaper on a concrete slab. However, cheap comes with a cost. A 1958 survey of the incidence of attack reported 3% of homes were attacked; a recent CSIRO survey, confirmed by Archicentre’s survey in 2008 showed the incidence had climbed to 33%… 11 times more and the percentage keeps climbing.

In most cases, termites did not get through the barriers — they crossed over them from the surrounding, untreated soil. The termites that do 99% of the damage to Australian homes are the subterranean type. They nest, forage and live in the soil. It takes them a couple of years after their initial colonising flight, to develop a nest of such size that they can significantly threaten a house and while they are building up their numbers, homeowners are mulching, planting ground cover and shrubs which could hide the tell tale ‘mud’ tunnels that cross from the soil, enter through the weepholes into the floor plate or studs which join up to all the other framing timbers of the walls and roof. If the weepholes are kept clear and watched, great! However, some homeowners build an extension, a pool pump house, a timber screen or a pergola, a cubby house or a dog kennel which can allow termites concealed access from the soil to the house. It happens. All too frequently… like 130,000 times a year!

That 33% incidence is going to climb much higher as more new homes are built in areas where termites are currently doing what they’ve done since prehistoric times—recycling fallen branches and logs, and eating the occasional dead tree. On each new block, we replace these trees with a truckload of very edible pine timber and wrap it in masonry and plasterboard so we can’t see it. If, or when, termites find a way in, we can’t see them either until damage is advanced, and costly.

As most of the trees have been removed, where do they come from? During the tree clearing process, 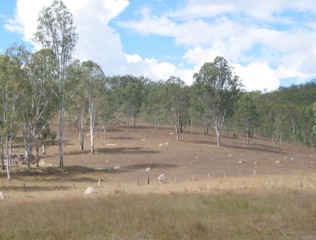 bulldozers crush and convert parts of some trees to myriad timber fragments which remain in and on the soil surrounding the new buildings. These fragments are then covered with turf

and landscaping where they can decay slowly giving off carbon dioxide which attracts the next wave of would-be termite kings and queens flying in to set up a new colony in the ground.

The Standards Association of Australia, the Shires and Councils and the building industry bodies are doing all they are going to do about termites. Maybe you believe ‘they’ should reduce the allocation of sub dividable land. Although development costs have certainly risen and therefore the cost of homes, it hasn’t stemmed the urban sprawl. An editorial in The Australian in January said, “…home ownership is not a great Australian dream, it’s a reality.”  About 70% of the new dwellings will be houses because that’s what we want. Apartment living is chosen by about 50% of new owners around Sydney, 35% around Melbourne but the choice of a free-standing home Australia-wide has remained constant at 70% for many years. We still want our own block even if the size has shrunk and the price has risen.

Yes, ‘they’ are doing something about the design of replacement houses in fire, flood and cyclone prone areas. As for termites, the Building Codes are not going to change any time soon. Individual homeowners need to take ownership of the termite threat. What can they do to defend their homes as they move into hostile termite territory?

Just over a decade ago, the professional pest control industry realised that barriers fail eventually, either by chemical degradation or the by-passing of intact barriers in the ways described above. Placing monitors in the soil surrounding our building structures have a high probability of intercepting those damaging subterranean termites while they are still outside in their build-up phase. When these monitors are attacked, the termites are fed a non-toxic-to-humans -pets -wildlife bait that the termite workers take back to their nest wherever it is, resulting in the complete death of that colony.  Over the decade, the system has worked well. Homes are less threatened as a result of a monitoring system reducing the number of colonies. But it is an ongoing war. Monitors must be regularly checked for years; forever.

Homeowners are the major cause of their own downfall; less than 20% of us call in the local pest controller. It may be because we think the barriers the builder told us about are a guarantee of immunity. This is wishful thinking or denial. Or we have heard the stories of pest controllers that didn’t do the job or check the right places so how do you find a good one? Anyway, their costs are too high. These are the usual excuses for doing nothing. However, DIY termite colony killing has finally come about. There are now DIY termite trapping systems and a termite bait that anyone can buy cheaply. If the products are now available and it only costs a few hundred dollars spread over 10-15 years, you’d have to be crazy not to defend your home yourself.

The CSIRO have produced a map of Australia showing termite prone areas where the incidence ranges from very low to very high. Scarily enough, the only place in the mainland States (Tasmania has no termites of consequence) showing ‘very low’ to ‘low’ incidence is the thin strip along the Great Ocean Road in Victoria. The rest of us are in the ‘moderate’ to ‘very high’ incidence areas. Termites know where we live.

The government is not going to stop the termites and the insurance companies do not cover you for termite damage. It’s up to each of us to defend our homes — monitoring and baiting works well and is not complicated.

Ion Staunton is the author of Urban Pest Management in Australia UNSWPress, Australian Termites UNSWPress and The Book on Termites, www.TermiteResearch.com.au

Next post: Controlling Termites If You Are a Homeowner